In the wake of rumours that he has formed an alliance with Asiwaju Bola Tinubu’s presidential ambition, former governor of Ogun State and presidential aspirant on the platform of All Progressives Congress, APC, Senator Ibikunle Amosun has disregarded the claim, saying he is in the race to secure the APC presidential ticket.

He said he is not cut out for aligning with any other presidential aspirant.

In a statement signed, Sunday, by his media aide, Bola Adeyemi, Amosun disregarded  rumours that he attended the screening exercise for Senatorial aspirants held on Sunday.

He said he was never at the screening exercise because he didn’t purchase nomination and expression of interest forms for senatorial election.

The statement reads partly, “The attention of Senator Ibikunle Amosun has been drawn to two news stories trending in the social media.

“The first falsely claims that Senator Amosun has been cleared to contest for the Senate.

“The second claims that Senator Amosun is set to align with a named presidential aspirant for the presidential contest. “The two news stories are false. They are instances of the brand of politics that responsible Nigerians abhor.

“For the avoidance of doubt, Senator Amosun procured only the forms for the presidential ticket of the All Progressives Congress(APC) and did not attend the screening exercise for Senatorial aspirants because he is not one. “Also, Senator Amosun is in the race for the presidential ticket of the APC and has no plans to align with any politician in the race.

Uncertainties as 18 aspirants jostle for Enugu governorship in PDP 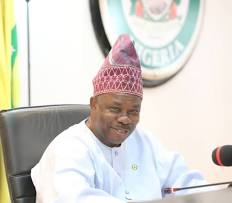