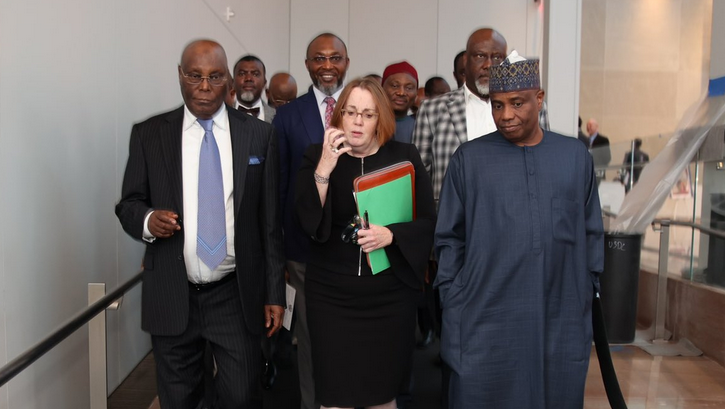 The candidate of the PDP for the forthcoming 2023 presidential election, Alhaji Atiku Abubakar recently made a dramatic second return to the US in company of 16 of his disciples.

This is the second time the Peoples Democratic Party’s presidential flagbearer will be playing politics with “going to the US”. The first time was in 2019 when he ‘paid’ his way by storming the US in a bid to convince his perceived doubting Thomases that he’s not wanted after 13 years of his inglorious inability to beat the US port of entry.

In what looks like another PDP’s political harakiri, the Waziri Adamawa has proved yet again, that the magic of getting into power and of course, the gimmick to hoodwink the Nigerian electorates into voting him to victory come 2023 lies in the US trip.

But interestingly, images that have been flying around from the said VIP meetings purported to have been scheduled with top US functionaries had only the 16-man team hanging around a particular lady who has been identified as an assistant secretary in charge of Africa in one of the US ministries.

The other pictures in circulation relating to the much publicised US trip are several postures of the team, taken in parts, with the most interesting being the one with the said lady.

One of the most baffling things about the US trip is the way the PDP handlers are making mountains out of a molehill. One wonders when going to America became a publicity stunt for someone of a revered presidential candidate and former VP, the same US that has become an all comers affairs?

In one of its propaganda, the PDP handlers had said Alhaji Atiku was expected to meet with top Nigerian business leaders based in the US and later with young Nigerian professionals in the Diaspora, but while fielding questions with Seun Okinbaloye on ChannelsTV yesterday, Thursday, one of PDP’s apologists who was also on the trip, Reno Omokiri changed the tune by saying, the Waziri Adamawa was invited by the US government for a briefing and that the meeting was hosted by the US’ Assistant Secretary of State.

More so, he also said there were more than 40 top US officials that hosted them and when he was asked about the group pictures of the conference purported to have been ‘initiated’ by the US government, Omokiri had this to say, “there were other pictures but we can’t release the pictures because those people were government officials.”

We’re not casting aspersion on Omokiri’s statement, but anyone who speaks mere portions of truth in order to deceive is a craftsman of destruction. At least, Omokiri who was once a former presidential aide should be knowledgeable enough to know that if government officials attend a conference on behalf of the government, the reports, images and outcome, as it may, of such an important conference or meeting automatically become official documents and legally admissible for public consumption.

He should also know that, under no circumstances will the US government invite Abubakar Atiku, either for an official briefing or secret conference as against what Omokiri is bandying around. And if he’s insisting the meeting was on the beehive of the US government, he should make a copy of the invitation letter available to the public.

Like they say, guilt is one of those emotions that feeds on itself; with every bite, it gets a little heavier. If not, why does it take Alhaji Atiku Abubakar another political steaming season for his “Return to American adventure”? The PDP can only fool some people at a time and not all the people at all times. From the look of things, there’s no doubt the fact that the US trip is a gambit of scheming for a possible soft landing, over the alleged pendulum of frauds dangling on the neck of it’s 2023 candidate.

Tunde Moshood is the SA Media and Communications to the Hon. Minister of State for Labour and Employment and a Member of the APC Public Affairs Committee for the Tinubu Shettima presidential campaign 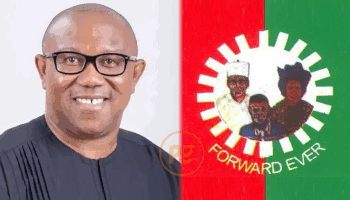 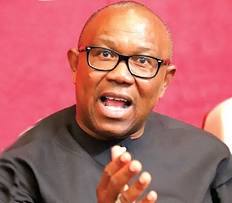