When your soar-away magazine reported months back that acclaimed designer Mudi, put a 23 year-old girl in the family way, it was a story that was greeted with mixed feelings in many quarters. While some said it was a fabricated story because Mudi, at that time was happily married to a Ghanaian lady; others said it was not impossible because his wife of many years has not been able to give Mudi any fruit of the womb, so Mudi could be looking outside to get a baby which has now materialized. How do we mean? Well, once again, we have been proved right, as incontrovertible evidence at our disposal has it that Mudi has actually gone ahead to officially formalize the marriage few weeks back. Not only that, the lady in question Ginny, the 23 year-old model has been delivered of a fine baby girl, whom we learnt is fine, kicking and looks exactly like Mudi her father.

That is not all, the Ghanaian woman, Mudi’s now official first wife, may have come to terms with the stark reality on ground that her husband now has two wives to contend with. Mudi, we also learnt, is also not doing bad as a fresh polygamist, trying to satisfy the needs of his two wives and giving all the affection and cuddling to his new bundle of joy, courtesy of his second wife, Ginny, despite his very busy schedule as a consummate and high-flying fashion designer with top of the range designs for the high and the mighty. For now, he remains the happiest man on earth as a father, husband and responsible family man nay a polygamist.

To further whet your appetite about Mudi’s new marital status, we take you back in time to serve you unedited the first story we regaled you with months back about this development in Mudi’s matrimonial home, which he neither confirmed nor denied. 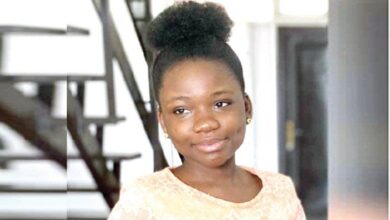 KAREN AKPAGHER AND PREMIERE ACADEMY: THE “TRUTH” THEY ARE TRYING TO BURY